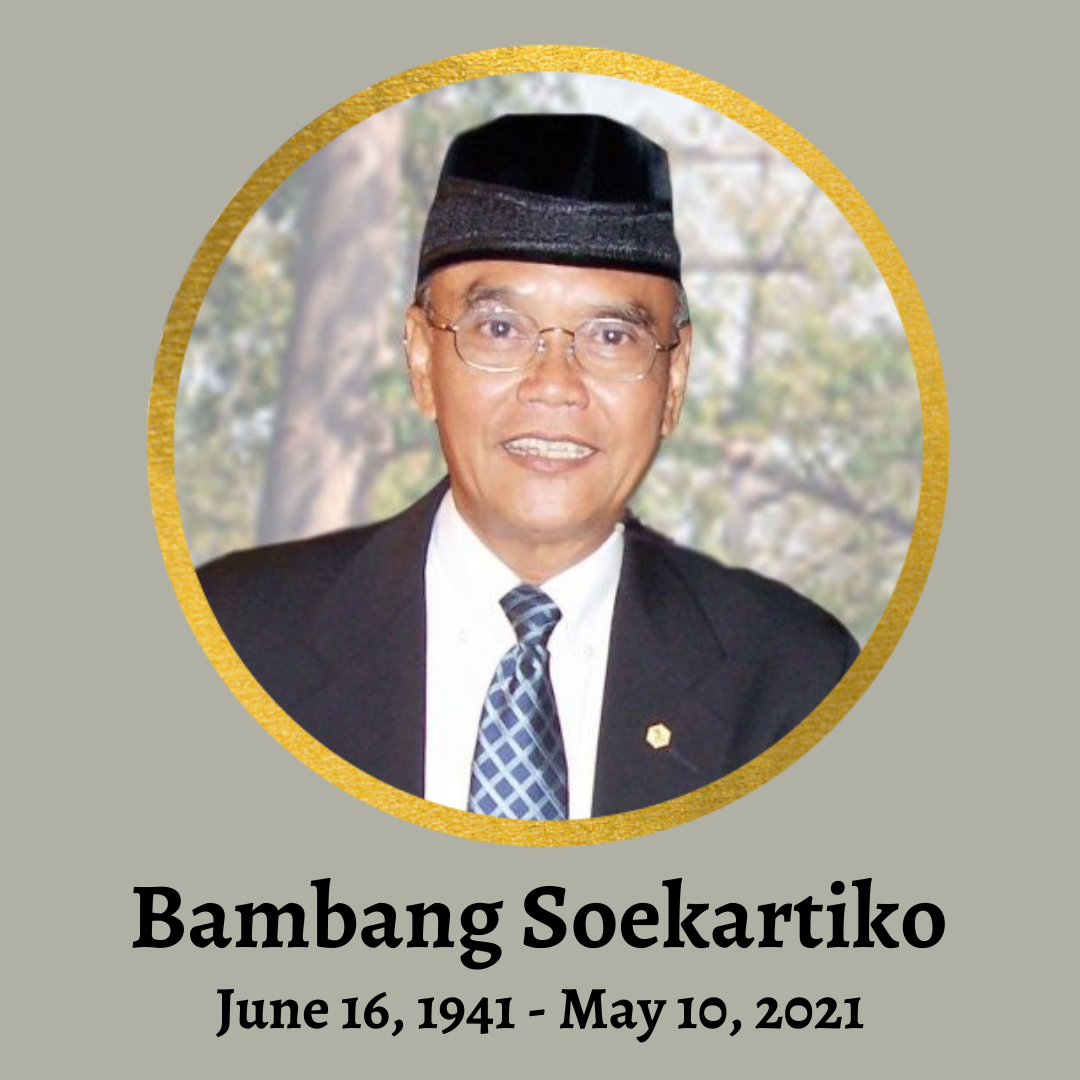 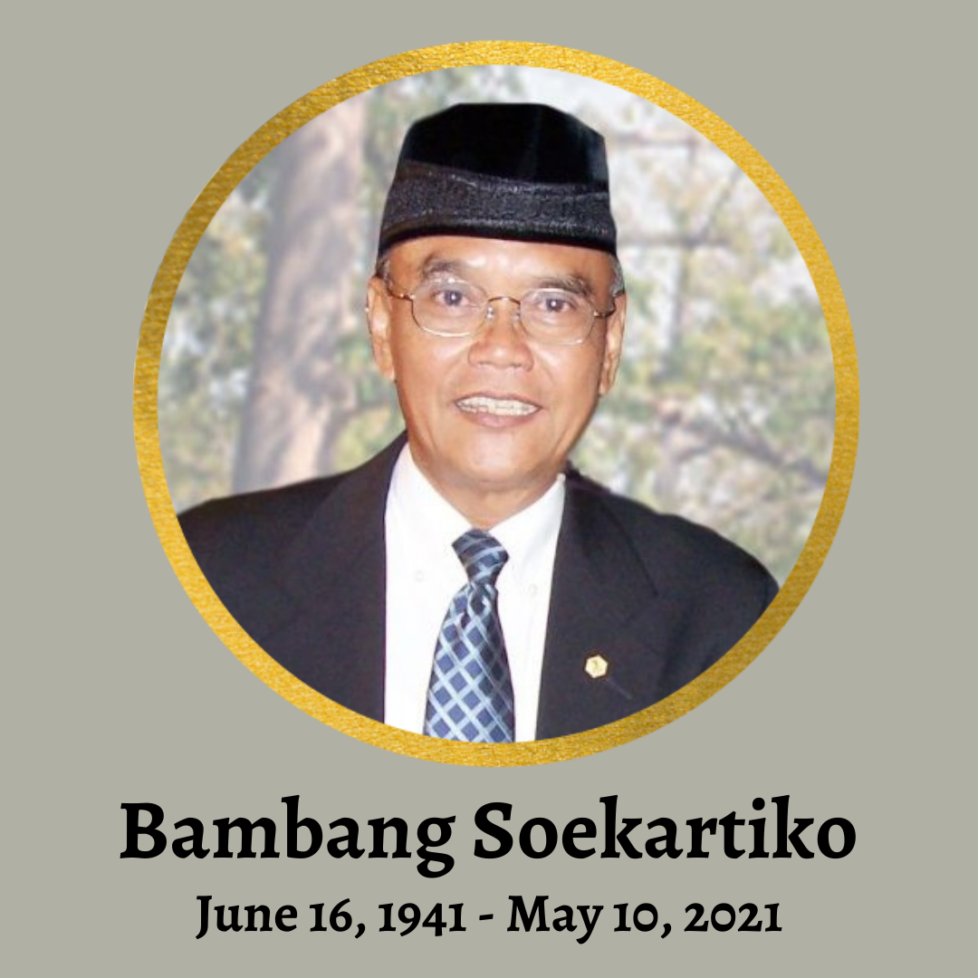 Bambang Soekartiko is wellknown as one of Indonesian Apiculture Pioneer. He started to learn about beekeeping in 1974, when he was assigned as the Head of Regional Forest Management Unit of Perum Perhutani (Indonesian state-owned enterprise in forestry) in Telawa, Central Java.

The teak forest area of Telawa was barren, so people hardly farm there. Due to the economic factor, the local people are pushed to steal leaves and woods from the forest, that lead to deforestation. In order to prevent further destruction, Perum Perhutani conducted a social forest management system in 1972. 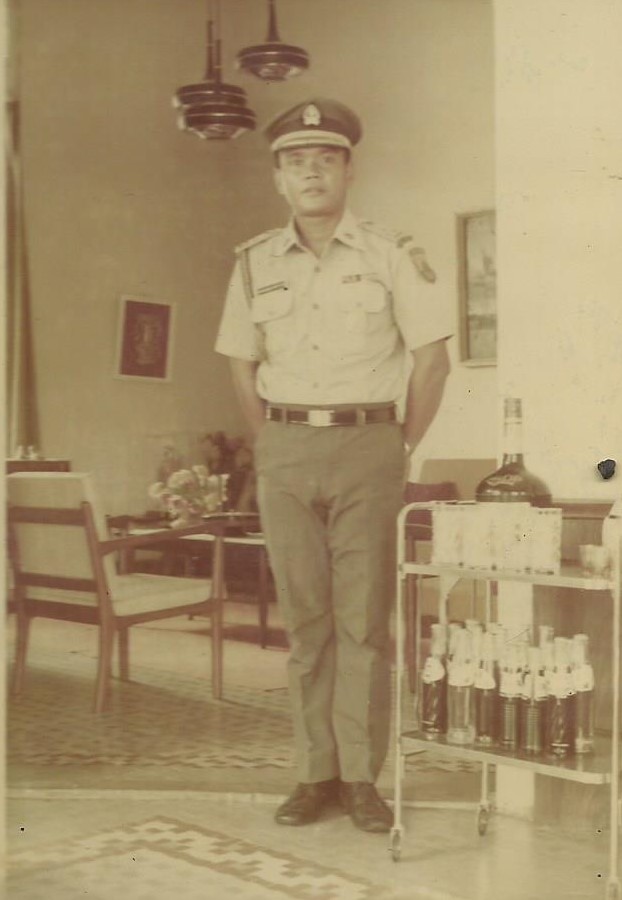 Bambang observed some villagers of his surveillance area who put 2-3 pieces of hollow woods on their house to keep honey bees, so that they didn’t need to go into the forest to get honey. They sold the honey to the town and gained money to increase their family income. He was interested in that beekeeping activity, and tried to share it to other villages in the Sub Forest Districts around Telawa.

Although the impact of beekeeping was not immediately seen, but the activity was noticed and reported to the District Head of Central Java Perhutani. The Indonesian Ministry of Forestry eventually regarded that the beekeeping activity which Bambang initiated for the villagers around Telawa forests supported the government’s social forestry program.

In 1976, Bambang was transferred to another district, that was in West Banyumas, Central Java. The area he should manage was wider, consisted of hills and shore around Cilacap and Banjar. Then in 1977, the Indonesian Ministry of Forestry sent Bambang to a one-month course about beekeeping in Wageningen, The Netherland.

Bambang was impressed about beekeeping. He learned about managing bees’ colonies, and how to prepare the environment and plants for keeping bees. Bambang tried to apply the knowledge when he went back to Indonesia. He planted Kaliandra (Caliandra calothrysus) to fence the forests of his duty area. The plant was suitable as the source of bee pollen and firewood at once.

In 1979, Lieutenant General Mashudi, who was the Indonesian Scout Movement Leader, heard about Bambang’s effort to introduce beekeeping technique to the villagers around forest. Then he invited Bambang to join the 27th Apimondia Congress in Athens, Greece. Bambang and his wife were the first Indonesia delegation attended the Apimondia congress. At that congress, Bambang presented about the condition of beekeeping in Indonesia. He was then elected as the Chairman of The Commission of Beekeeping for Rural Development. His duty was to gather papers about his commission and present them on the next Apimondia congress.

In 1980, Bambang was appointed as the Head of Watershed Management, General Directory of Forestry, Ministry of Agriculture in Bogor, West Java. On summer 1981, Bambang should attend the 28th Apimondia Congress in Acapulco, Mexico. As the Indonesian government already convinced that beekeeping had a good potential to support forestry program, the Ministry accommodated Bambang and his wife to attend the congress as the representative of Indonesian beekeeping society.

In 1983, General Directory of Forestry was transformed into Ministry of Forestry. With the new structure of the ministry, Bambang was appointed as the Director of Soil Conservation Directorate, under the Directorate of Reforestation and Land Rehabilitation. In the same year, the 29th Apimondia congress was held in Budapest, Hungary. Bambang attended the congress with some representative of Indonesian Scout Movement (Pramuka). 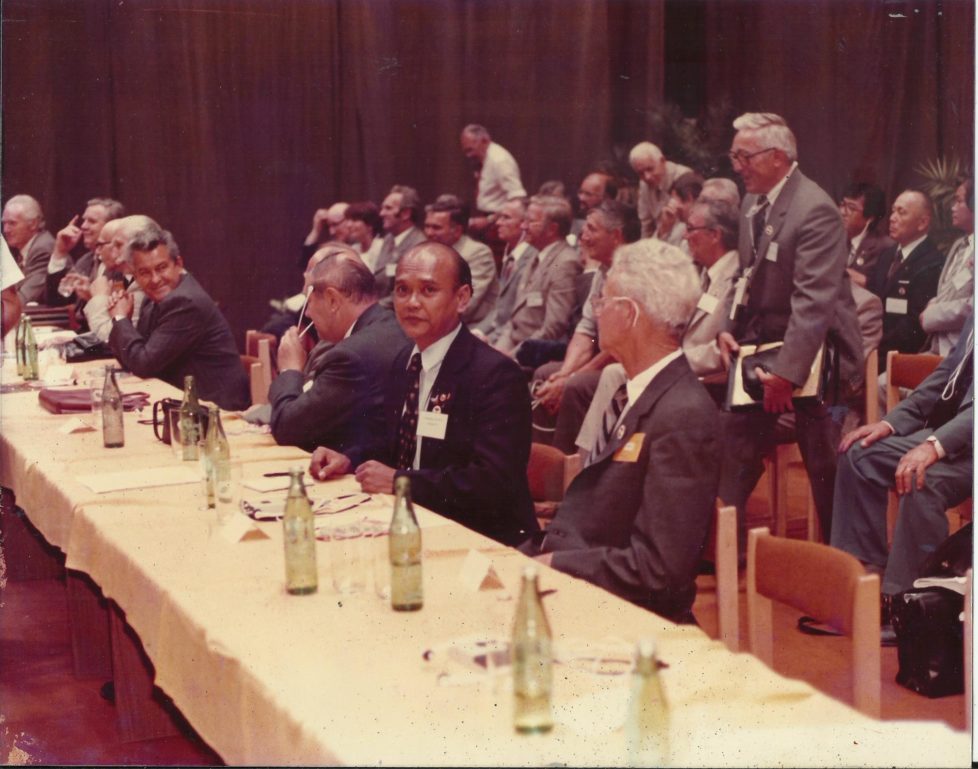 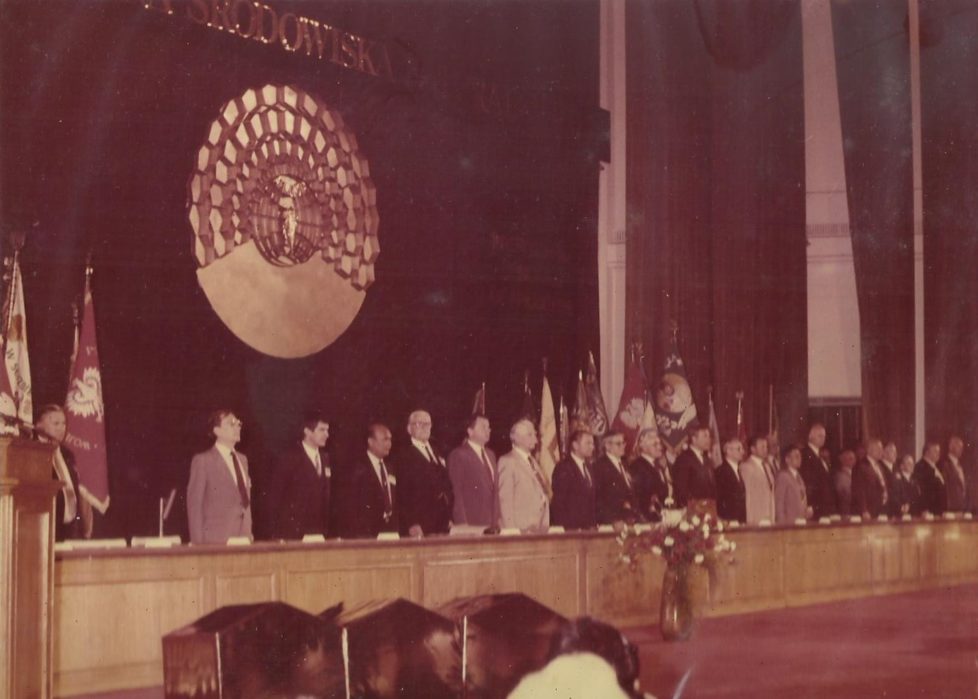 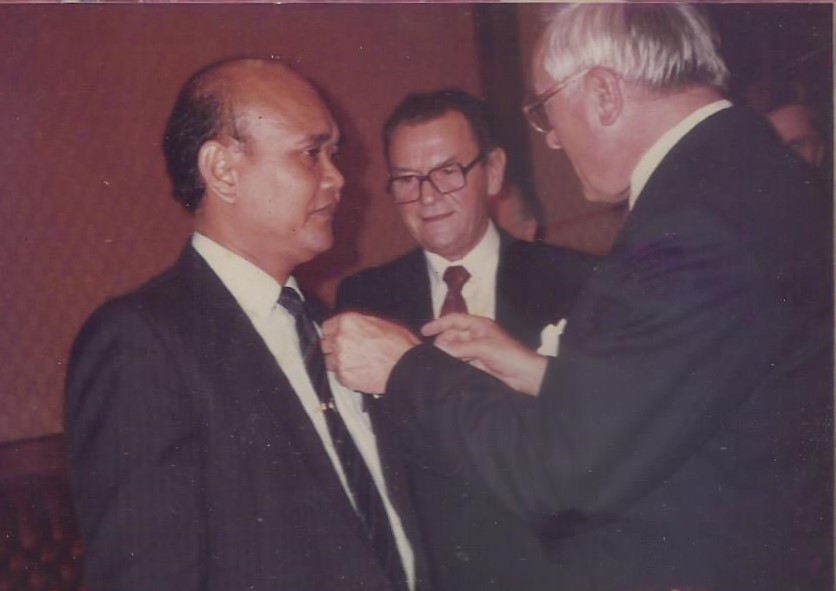 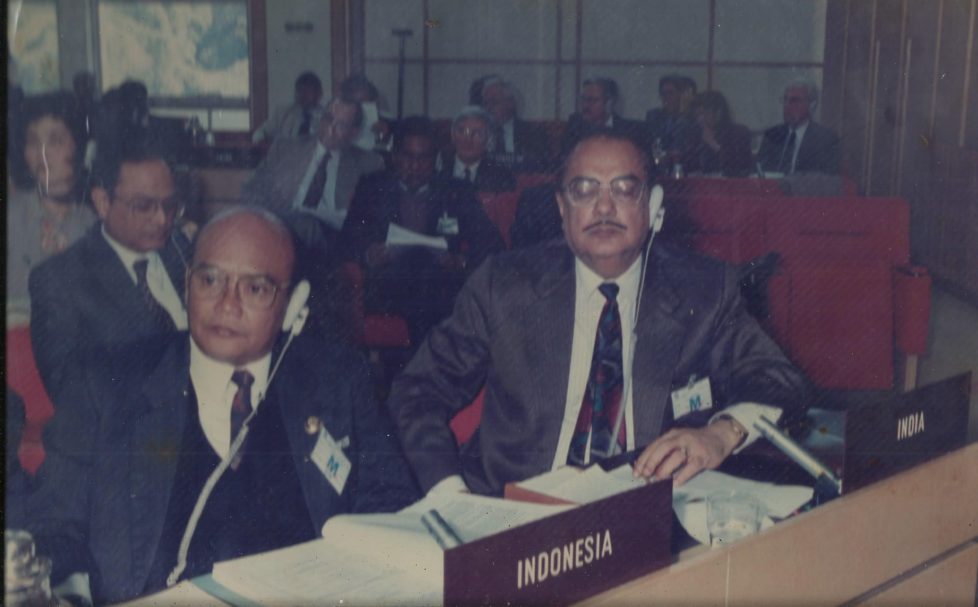 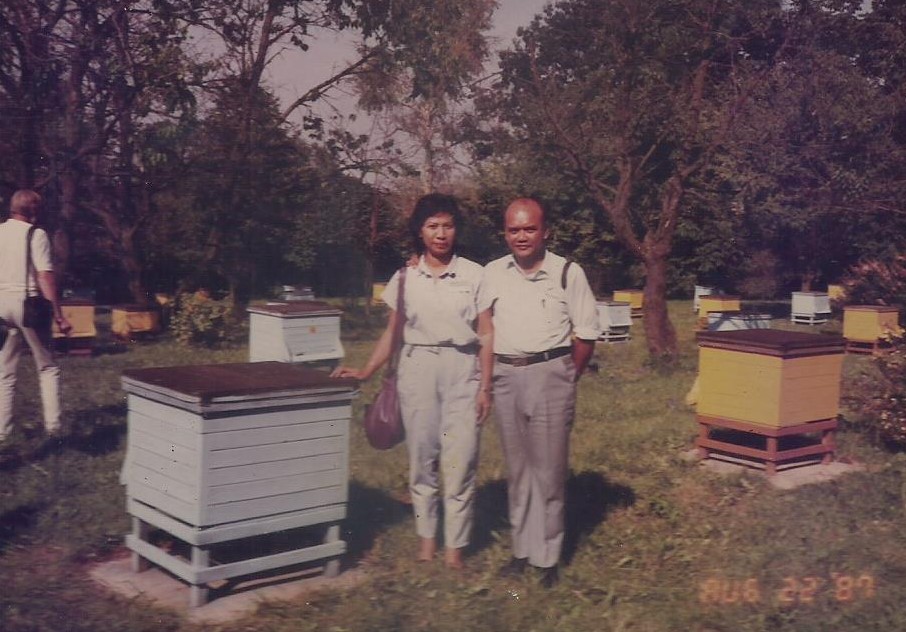 On the 32nd Apimondia congress in Rio de Janeiro, Brazil (1989), the number of Indonesian delegations increased. There were representative of Forestry Research and Development, Perum Perhutani and a doctor from Indonesian Scout Movement. It indicated that beekeeping in Indonesia was more attractive to many parties.

After ten years serving the Commision of Beekeeping for Rural Development, the chairman position was replaced by DR. Nicola J. Bradbear from England, who had a connection with IBRA (International Bee Research Association). 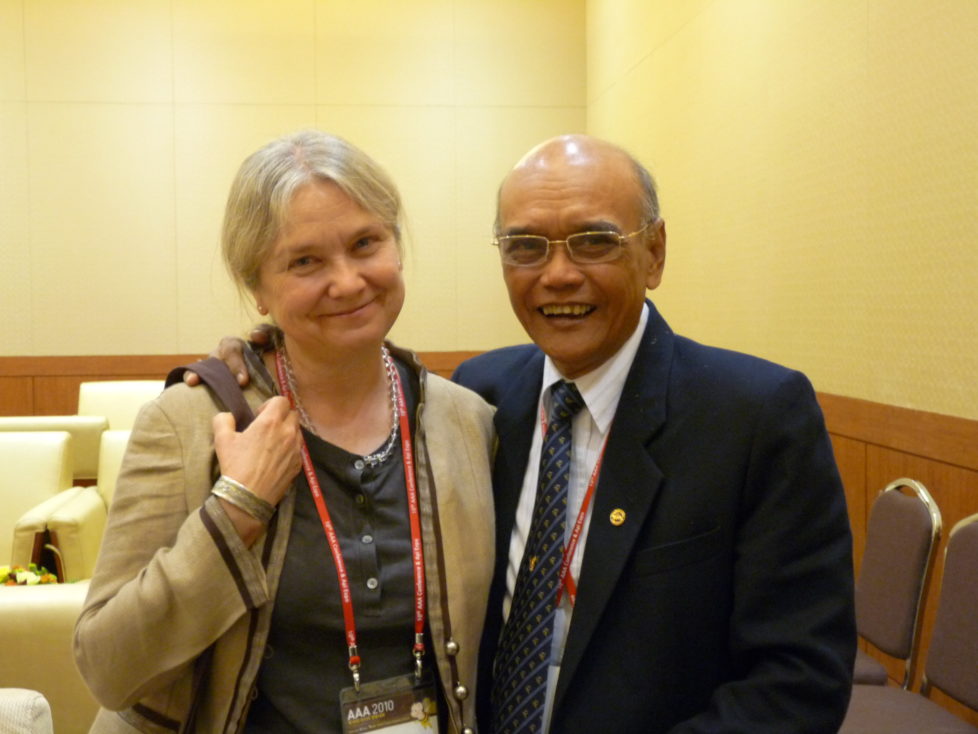 The concern to beekeeping in Indonesia from Indonesian government institutions increased, that finally it was officially handled by the Directorate of Reforestation and Land Rehabilitation, Ministry of Forestry.

As a government employee, Bambang must be transferred to several different divisions. After becoming the Director of Soil Conservation Directorate, he was assigned to be the Head of Foreign Relation Bureau. Then in 1989 moved to Medan, South Sumatera, as the Head of Forestry Regional Office. But it did not turn him away nor lower his attention to Indonesian beekeeping.

Assisted by his relatives in Central Java village, Bambang conducted his own Apis mellifera colonies in 1980, so that he really understood the twist and turn of beekeeping in Indonesia. He applied various techniques that he got from the Apimondia forums to his own bee farm, before share them to other farmers. 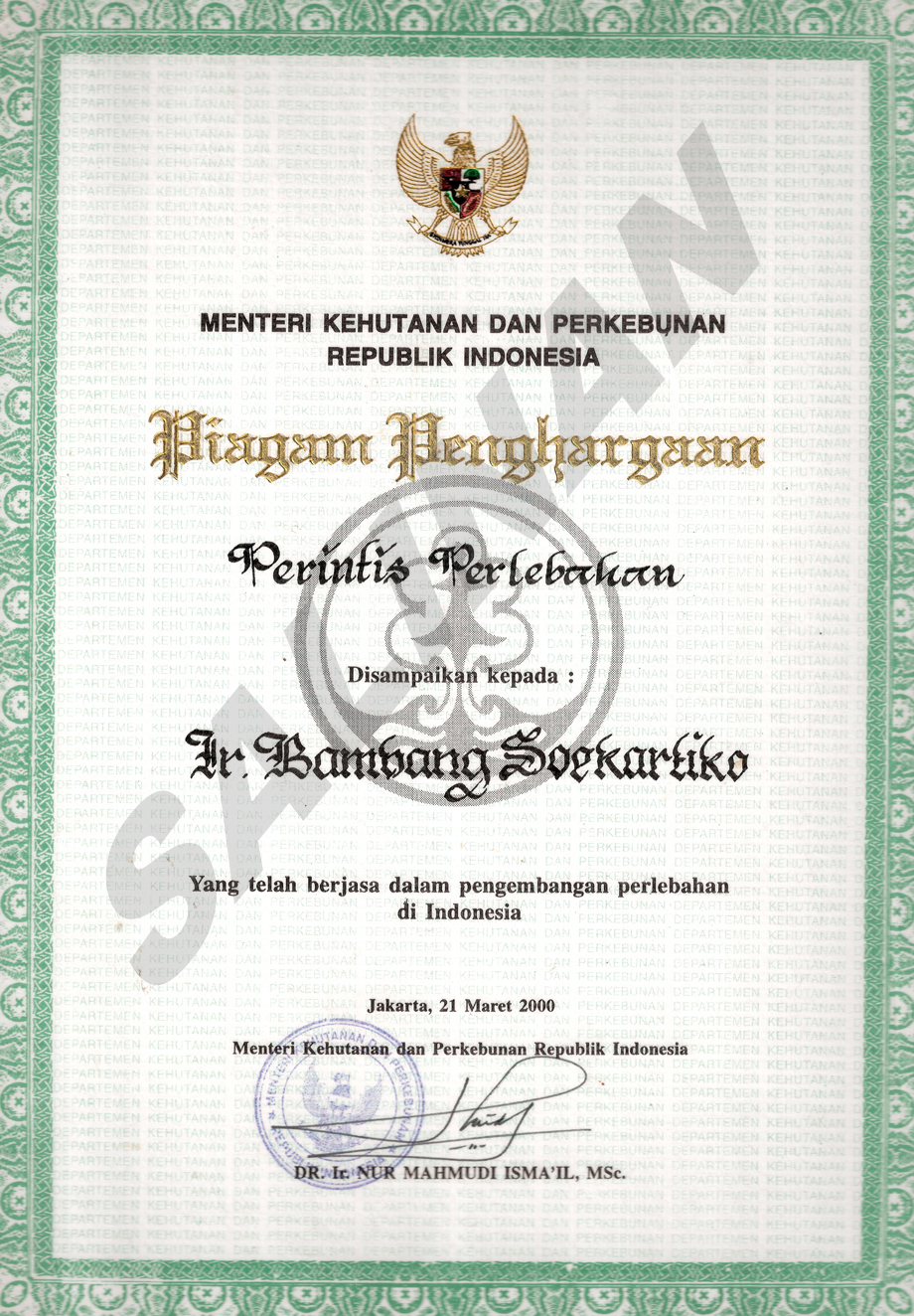 On the National Honey Day, March 2000, attended by President of Indonesia, Abdurrahman Wahid, the Minister of Forestry granted Bambang Soekartiko an award as the “Indonesian Apiculture Pioneer”. 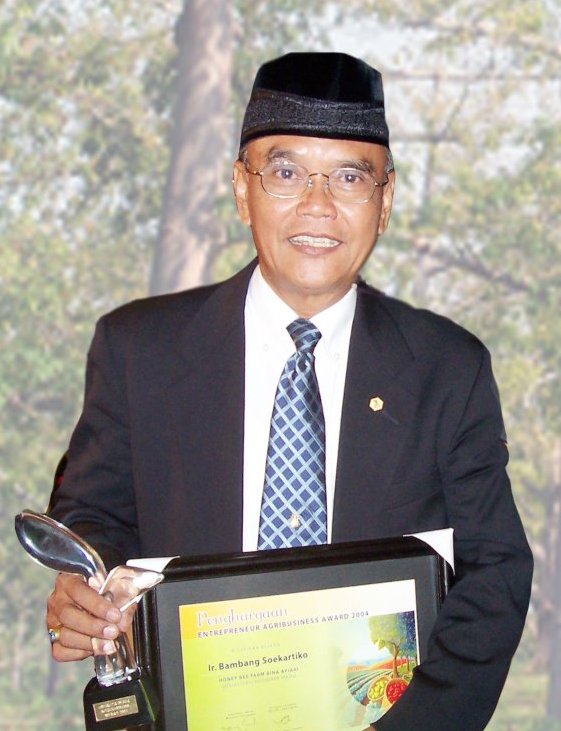 Bambang still managed to attend Apimondia congresses every two years. He came along with some delegations from Indonesia. They attended the 33rd congress in Beijing, China, the 34th in Lausanne, Swiss, the 35th in Antwerp, Belgium, the 36th in Vancouver, Canada, the 37th in Durban, South Africa, the 38th in Ljubljana, Slovenia, the 39th in Dublin, Ireland, the 40th in Melbourne, Australia, and the last Apimondia congress that Bambang attended was the 41st congress in 2009 in Montpellier, France. 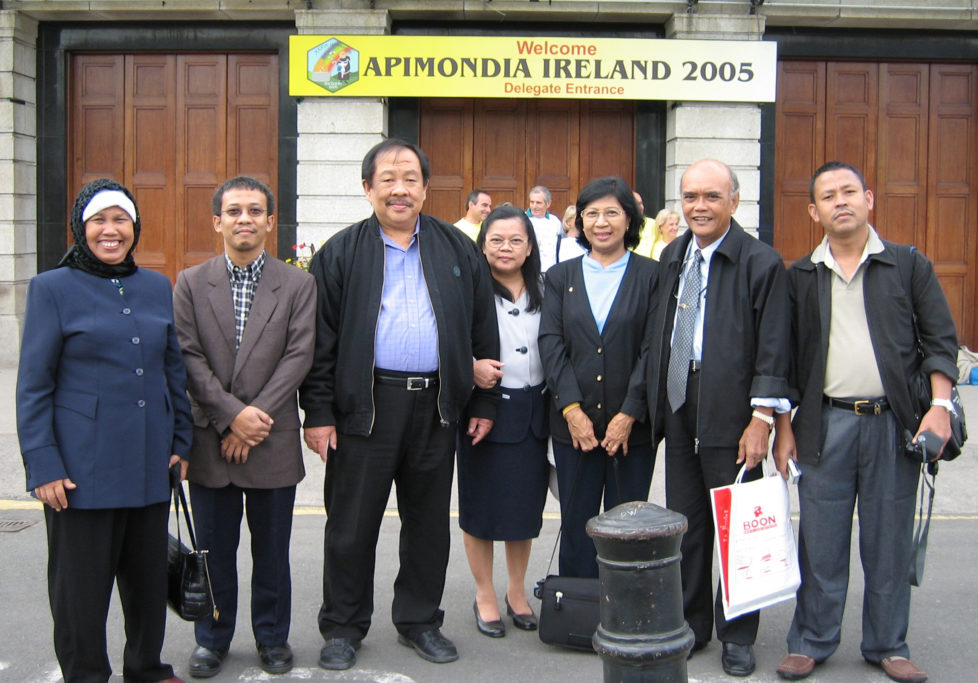 Bambang’s skill of negotiation persuaded many parties to attend the congress, even though they had to accommodate themselves. Beekeeping activities in Indonesia became more attractive to scientists, business people, hobbyist, and many other interests. In 1992, Bambang and some beekeeping enthusiasts initiated The Indonesian Beekeeping Association / Asosiasi Perlebahan Indonesia (API).

In 2001, Bambang retired from government service. But his interest to apiculture was never subsided. His last employment was Director for External Relation of CIFOR (Center for International Forestry Research) in 2001. He did not attend any Apimondia congress since then, but he was interested in apitherapy and several times actively participated in some apitherapy forums like World Propolis Forum, International Apitherapy & Bee Products Society (IABPS) and International Apitherapy Health Care & Beeacupuncture Association (IAHBA) in China, Deutcher Apitherapie Bund in Germany, and Asian Apicultural Association in South Korea, Malaysia and Indonesia.
By participated in those important apitherapy forum, Bambang influenced Indonesian apiculture enthusiasts to develop other bee products besides honey as an alternative medicine or functional foods. He often promoted propolis, royal jelly, bee pollen and bee bread as healthy food and applied the benefit of bee products to his own health and his family’s.

One of his goal was to introduce beekeeping/apiculture to villages in Indonesia, especially in remote areas, so that the people could increase their wealth and health from the bee products. 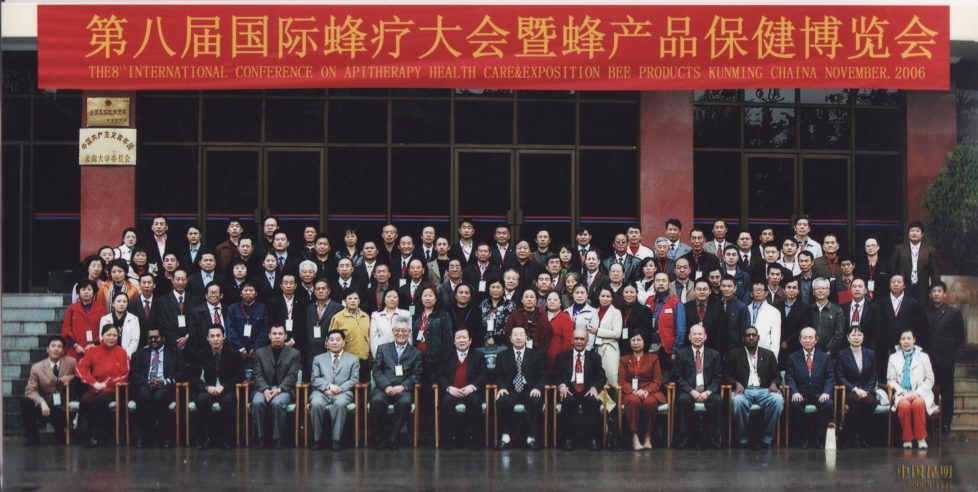 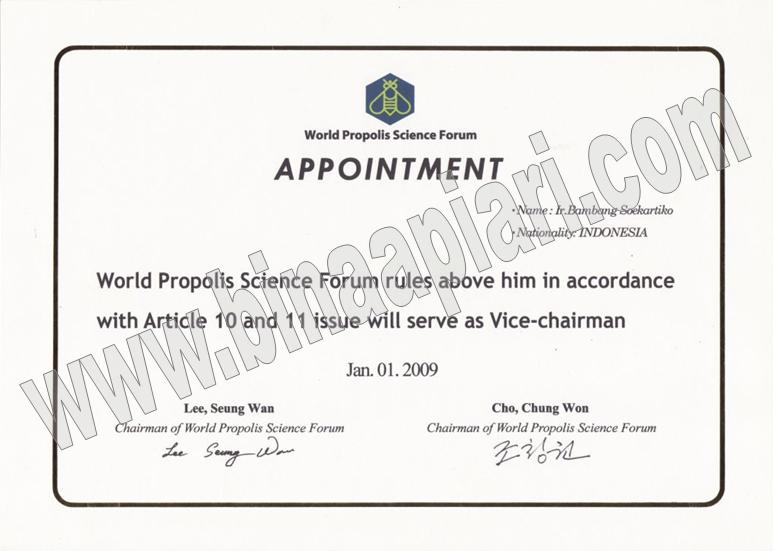 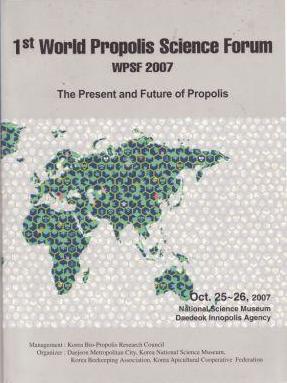 After around 40 years of struggle, now Indonesian beekeeping is developing. More people are aware of the importance and benefit of beekeeping. Beekeeping training centers are established in many regions. Researches on beekeeping and the products sprung up. Even though Bambang is now resting in eternity, his spirit remains encouraging Indonesian Apiculture. 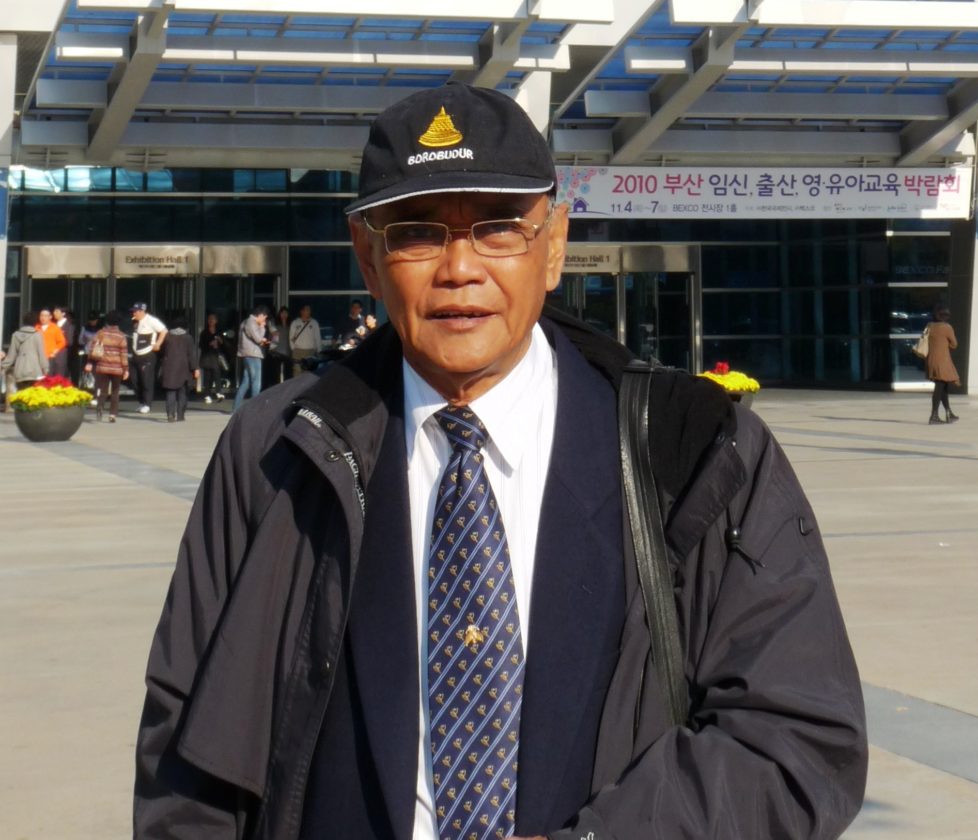 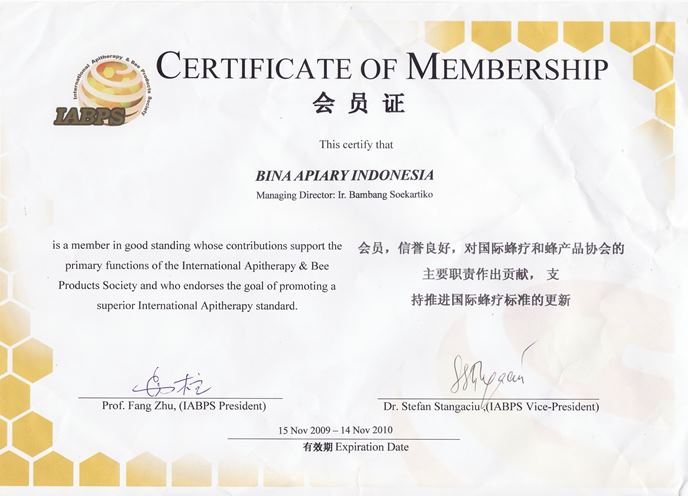 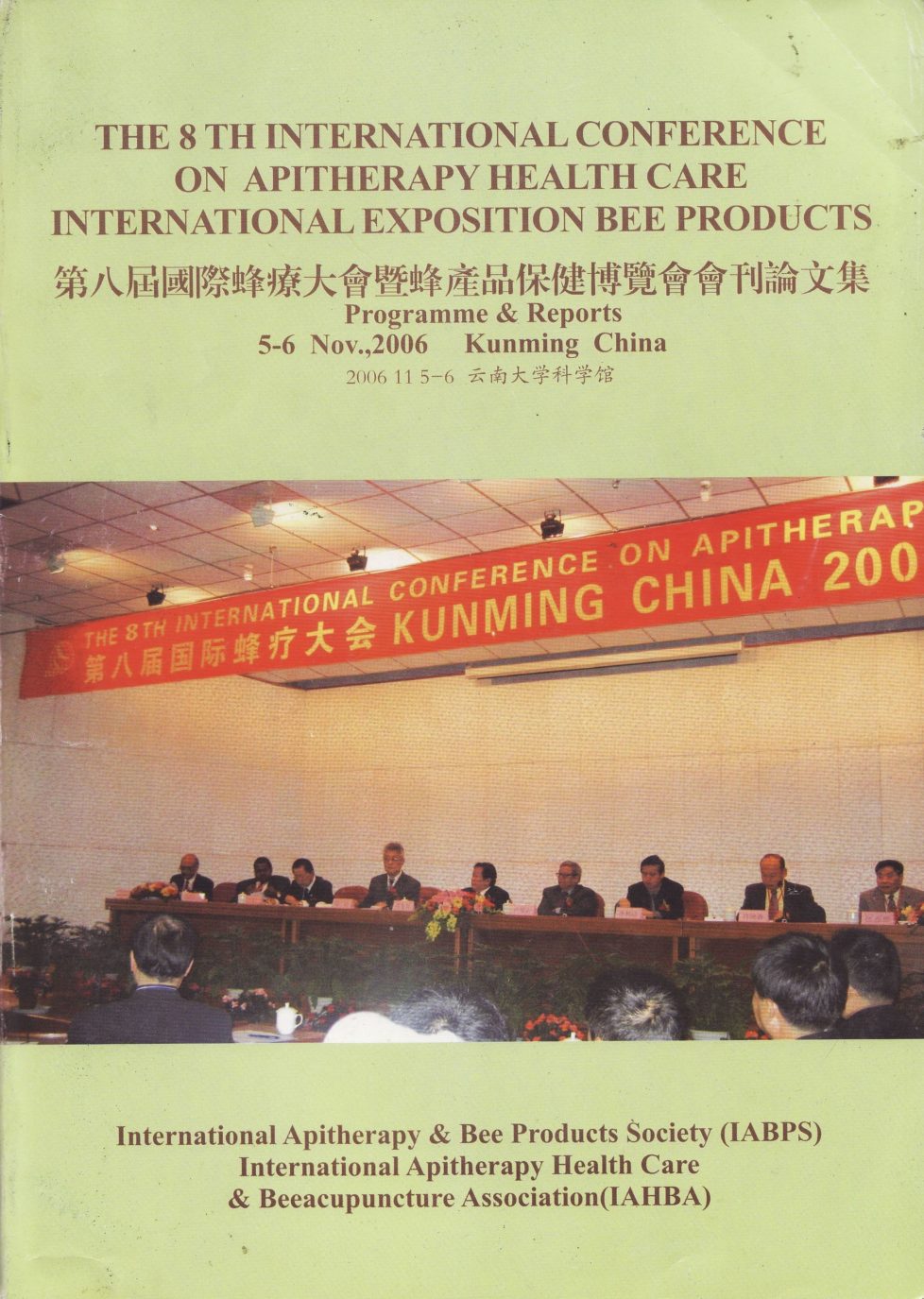 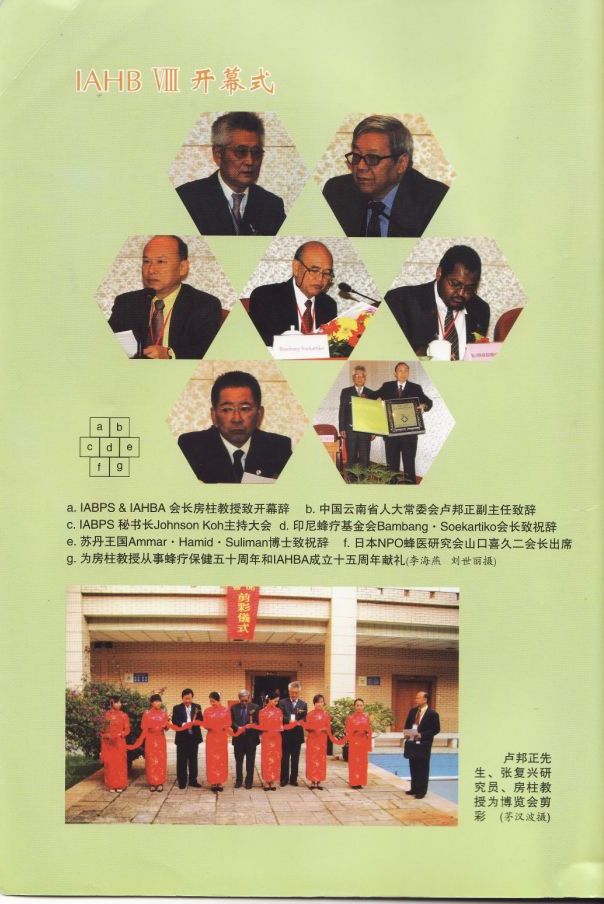 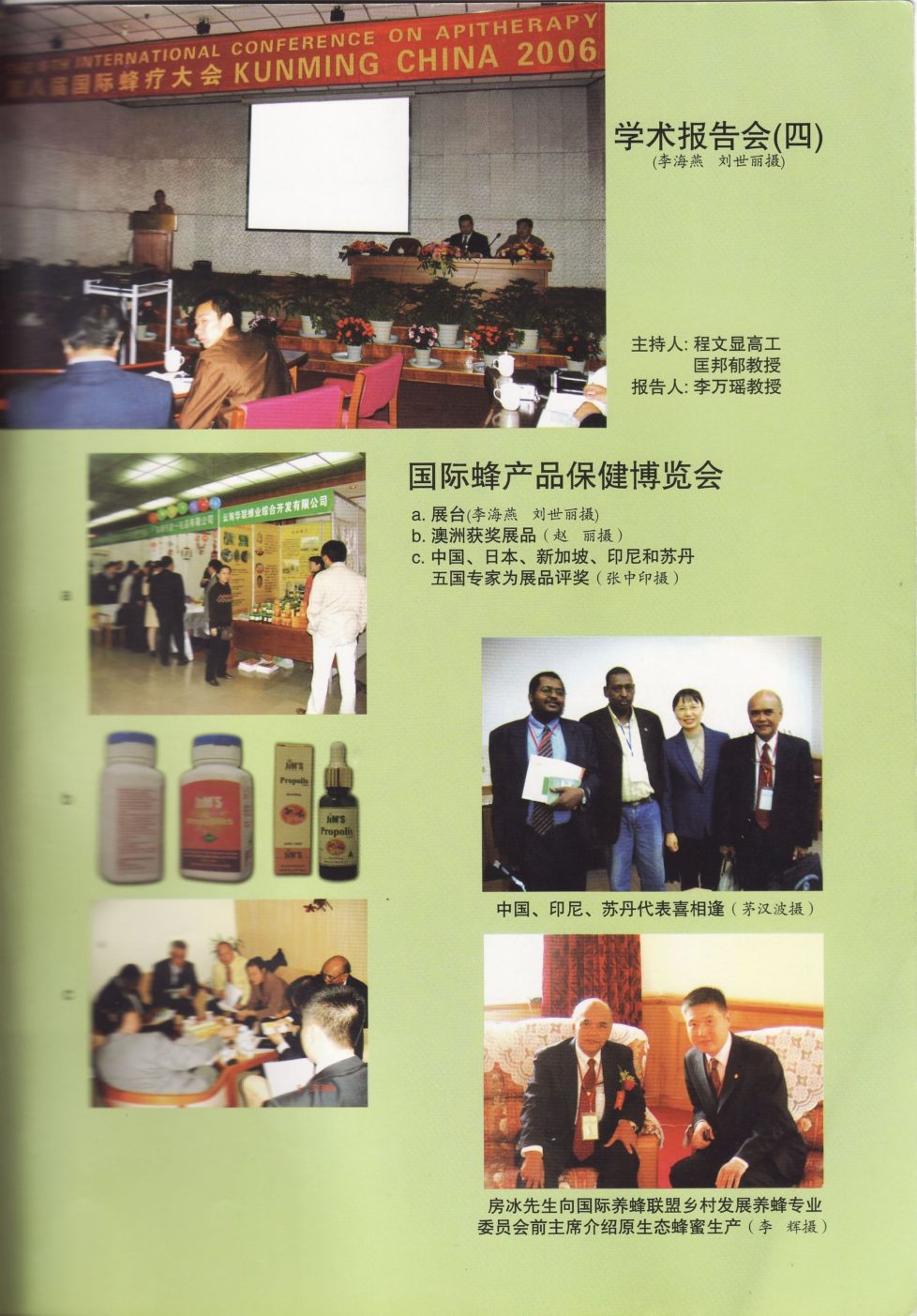 a. IABPS & IAHBA Chairman, Professor Fang Zhu, delivered the opening ceremony.
b. Speech by the Chairman and Deputy Director of Shengbang, the Standing Committee of the People’s Congress of Yunnan Province, China
c. IABPS Secretary-General Johnson Koh presided over the conference
d. Bambang Soekartiko, President of the Indonesian Beekeeping Association, delivered a greeting
e. Dr. Ammar Hamid Suliman, the Kingdom of the Sudan delivered a greeting
f. Professor Yamaguchi Kikuji, the president of NPO (the Bee Medicine Reseach Center)
g. The 50th anniversary of Professor Fang Zhu’s apitherapy and health care and the 15th anniversary of the establishment of IAHBA 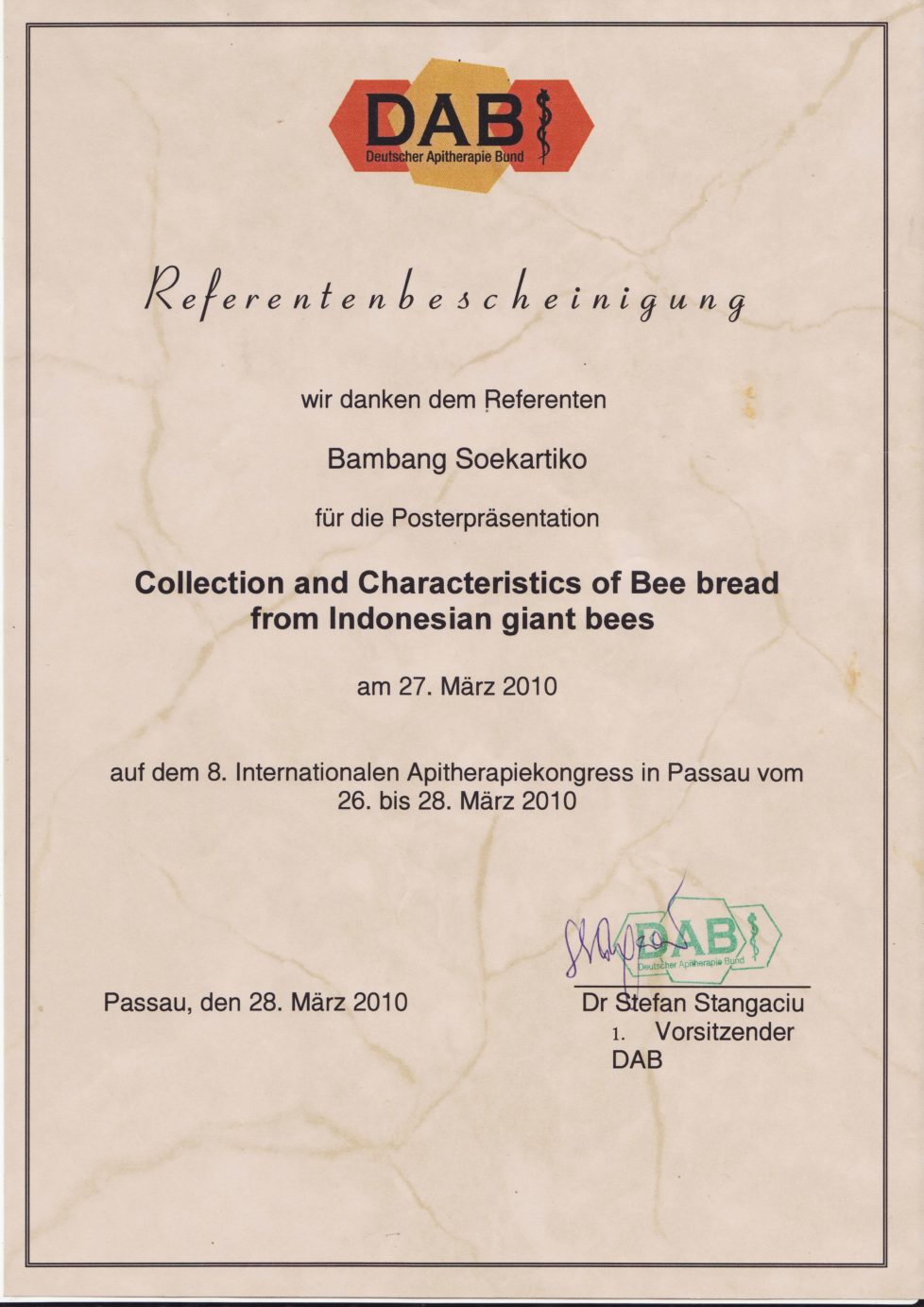 With Prof Matsuka from Japan 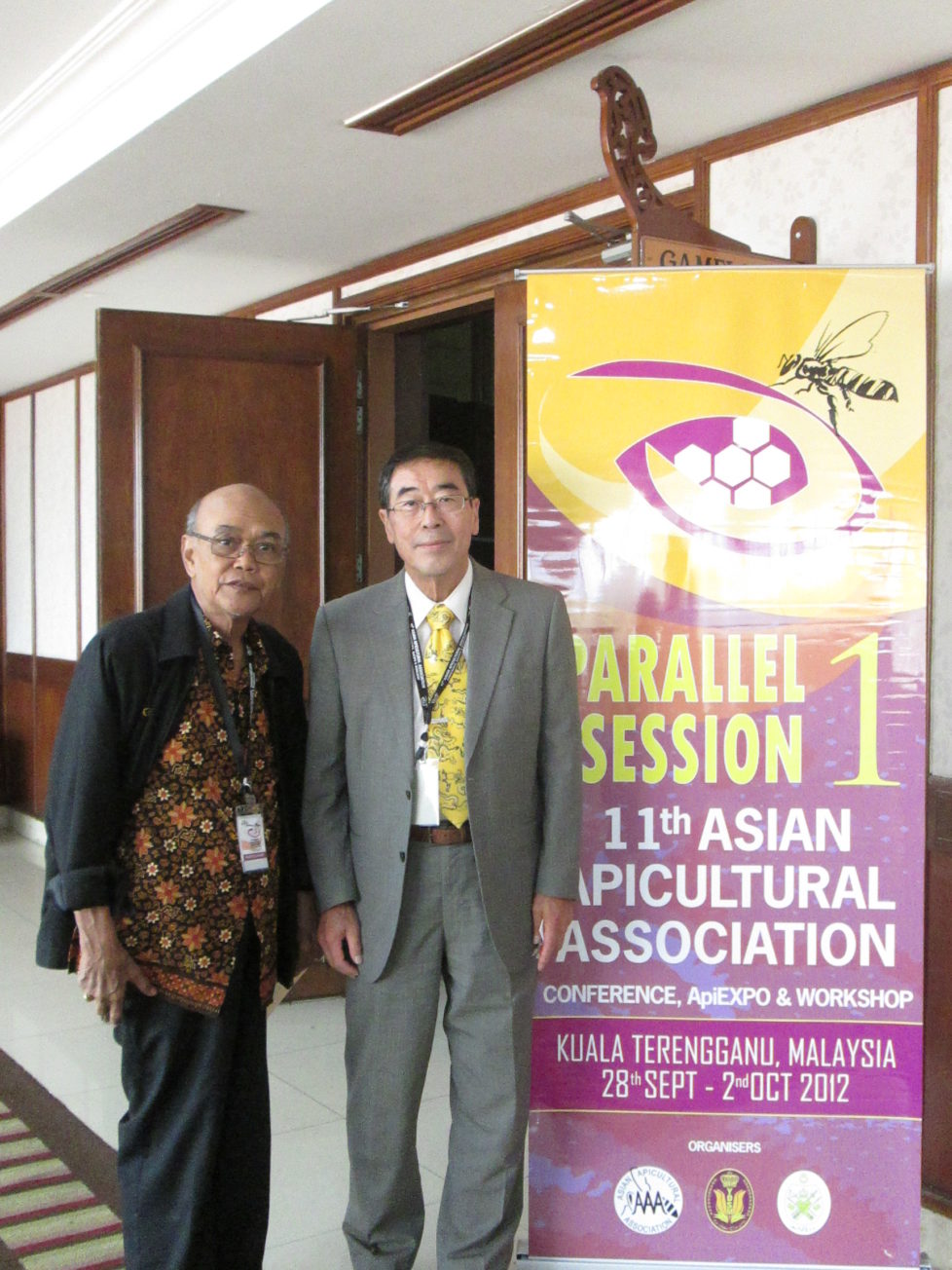 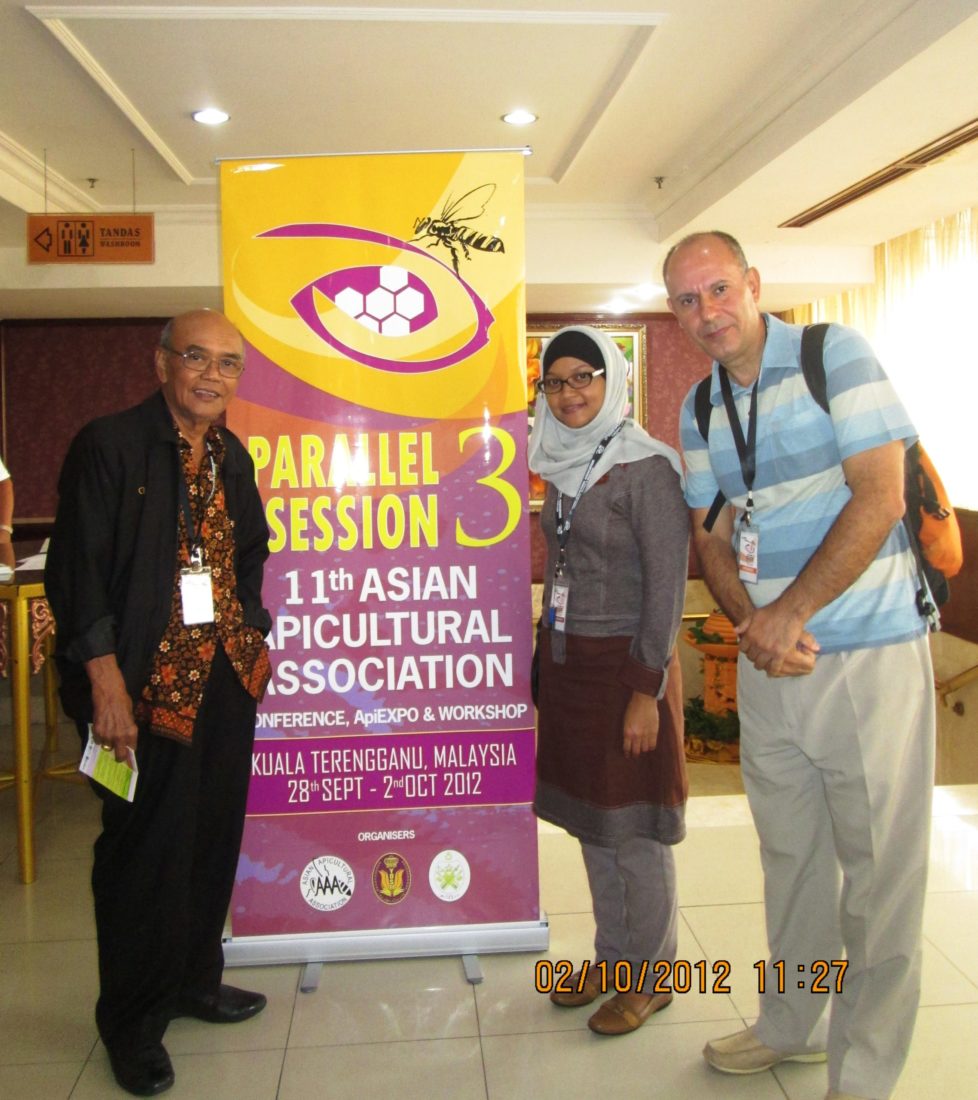 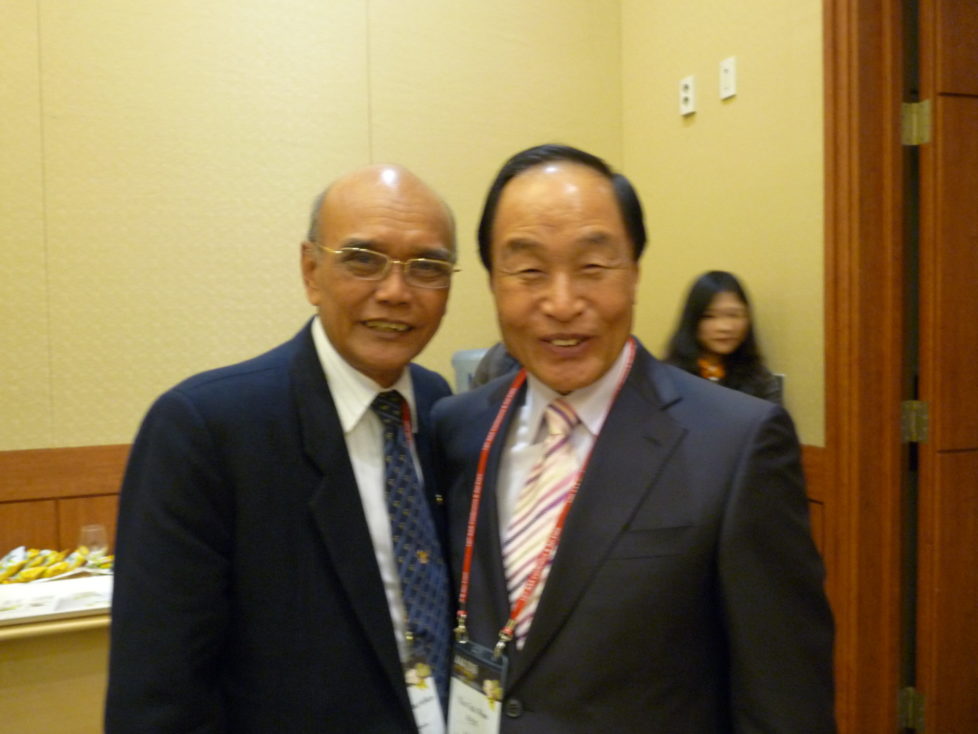 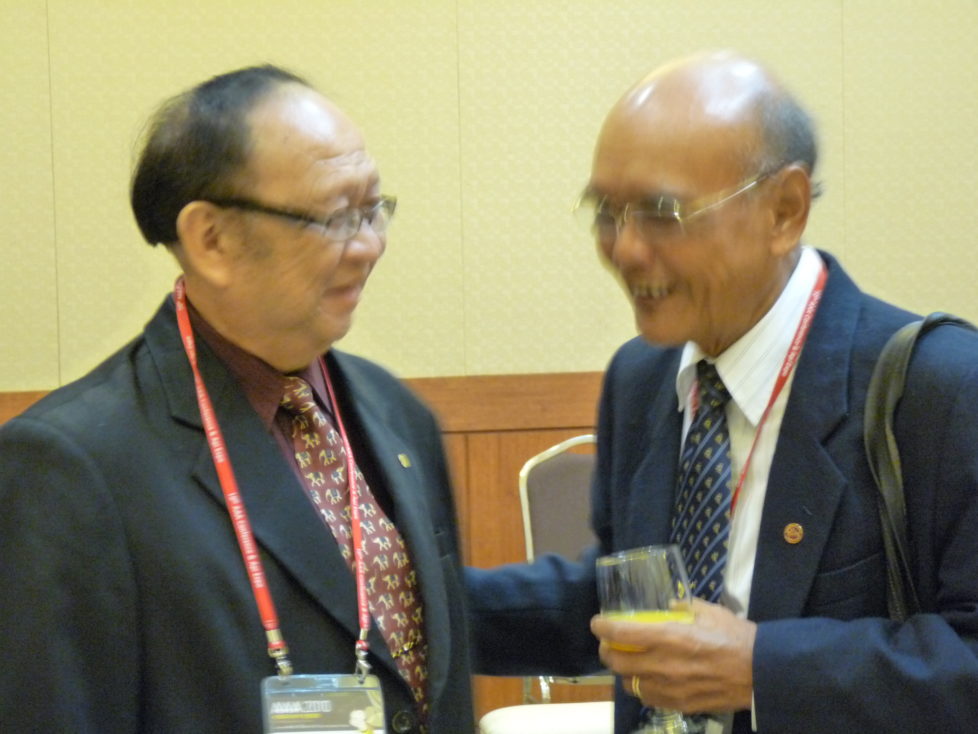 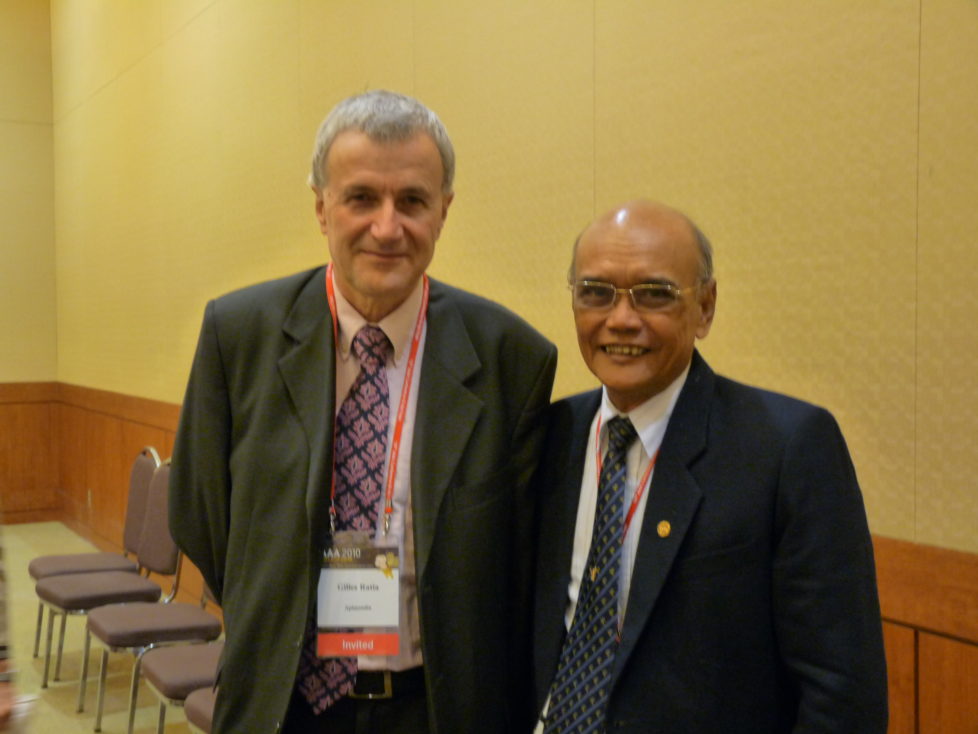 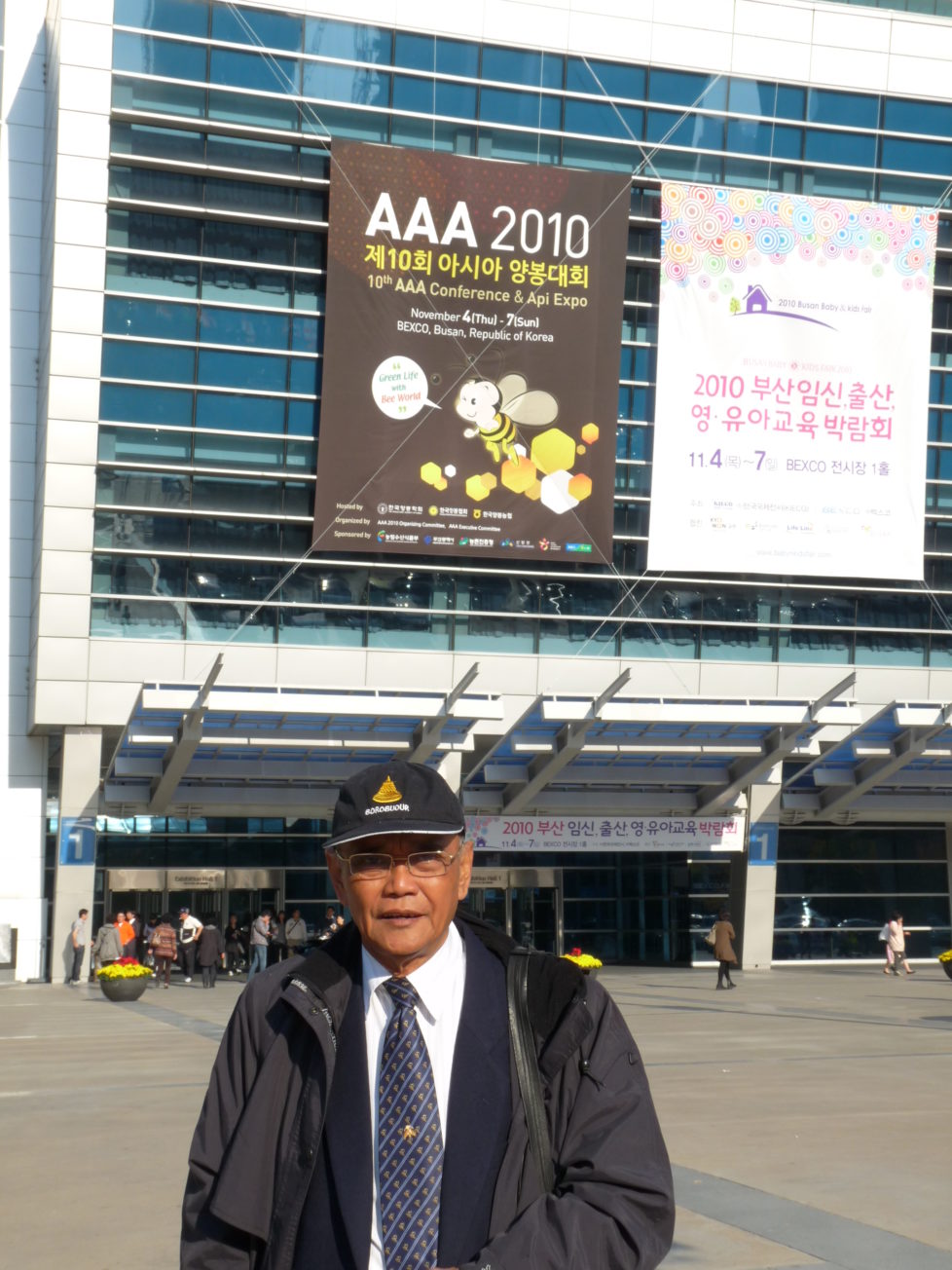 With Prof. Ahmad from Saudi Arabia 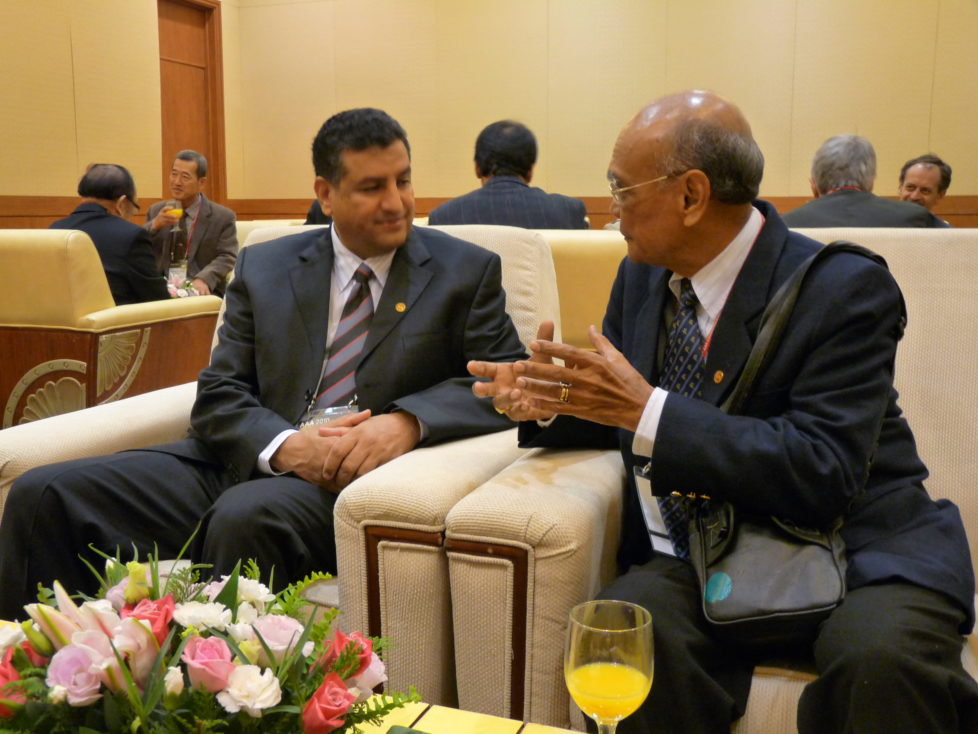